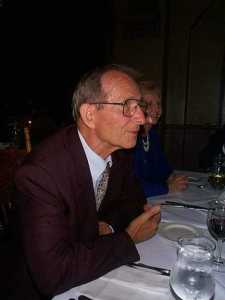 A special note about my father who would have been 93 this November:

My father died in December 2008 at age 89.  In the end, he simply wore down as quietly as he had lived. Our family had the good fortune of his dying process occurring in the Hospice he founded in the early 80s. He was cared for by people that had known him and loved him for a generation. Eternal sleep took him surrounded by his family and friends. An appropriate ending to an amazing life. For that I am immeasurably grateful.

By history, he got into veterinary school at Texas A & M by a series of events that are fascinating and I shall spare you. He didn’t think he could ever make it into medical school so he settled on the next best. This is where he was when he met my mother. He was a guy that never had anything in his early life and ended up scratching for everything he got and got by with dumb luck and being in the right place at the right time. When he met my mother, she had spent two years at Texas Christian University and had dropped out and was a secretary somewhere there. He met her at a dance, which since there wasn’t much else to do and it was a big part of their social lives. He took one look at her first time and thought she was the most beautiful female he ever saw (She was a voluptuous babe at the time- I have the early photos).

He didn’t say why he decided to marry her but I suspect it was because she exuded some element of class he thought would be good for him. Nailing down a beautiful woman is a pretty big ego trip and I think he thought he needed that boost to reinforce his ambitions that he didn’t have much of a chance at. It was a whirlwind romance. But as it happened, he worked hard and managed to dumb luck into some good things for him. He was good in anatomy and shortly after he was married he was offered an assistant professorship at Baylor in the Veterinary School with the promise of a career and tenure. This is apparently the life my mother had anticipated and one of the premises she married him for. When they got married, she perceived their future as it appeared to be. She wanted to be a nice stable professor’s wife in the milieu she knew and understood.

She didn’t perceive the all consuming, steam rolling passion to go to medical school that boiled within him. it never crossed her mind that a graduate of veterinary college with a great career ahead had any other passions. Their whirlwind romance was not long enough or intuitive enough for to understand anything other than what appeared to be. Ultimately, in a feat of dumb luck that is pretty close to the dumb luck episode that got me into medical school, he managed to squeak into the first class at Baylor School of Medicine, 1943, and their lives changed radically.

Suddenly, she was pregnant with me and they were scrounging for every dime. He was working every odd job he could find to pay tuition and expenses, studying all night and she was selling nylon stockings door to door. This wasn’t what she had signed up for  and he strongly implied there were marital problems from then on.

They didn’t have two nickles to rub together from then on. Ultimately they ended up at Cleveland City Hospital (now Metro) for surgical residency. Lived in a sparse “married housing” area and my mother and i ate most meals with him at the hospital cafeteria since it was free. This was 1947 and my mother was pregnant with my sister. One night she had a sudden onset of pelvic pain and shock. He carried her two bocks to the hospital where she went immediately to the operating room for a ruptured uterus, a complication of a previous Cesarian (me). Skirted death of both mother and baby by a millimeter.

Finally lack of money forced the family to take a break after Internship to make some money. Moved to Premont, down in South Texas to be a family practitioner for a while to replete funds and save money for residency in Surgery. It goes on from there.

As a kid in high school, I recall loud arguments emitting from their bedroom. She declared she hated the life and couldn’t do it anymore. He declared medicine was his only life, his only passion, he didn’t know how to do anything else, did not want to do anything else and if she couldn’t be part of it he didn’t know how to make it better for her. He always stayed up late watching TV with me so it was certain she would be asleep when he retired. They divorced in 1970 and neither spoke to either again. My mother died in her sleep at age 93 in Macon Georgia

There’s some kind of lesson there, not sure what it is. I plan to do the same (writing memoirs). My kids have little interest in me if for no other reason because they are so involved in their own lives. I figure when I’m gone they will wonder about me and I think I would like them to know about my life.

It is appointed to all a time for life and a time to die.  Manners of death are merely inevitable transitions of a nature we cannot conceive.  What has meaning is manners of life.  In his 89 years in this world, my father lived a live of meaning to his many patients, friends and loved ones.  Those remaining behind will grieve for our loss.  I rejoice in his life.  There can be no greater monument than for those who grieve to go forth with enriched lives as a result for that memory.