Winning in Formula One for the World Championship of Drivers from two extremes of skill.

In 1976, one end of the spectrum contained British driver James Hunt, a fashionably longhaired blond darling of the media and not a few females. Hunt had no concept of fear. He won races by blundering around the track at speeds unapproachable by mere racing mortals, surviving by natural talent and dumb luck.

On the other side of the spectrum was the Teutonic technocrat of the track, Austrian Nikki Lauda, who won races by figuring out the track dynamics as a quadratic equation. Nikki won by superhuman consistency around the geometrically determined shortest point between numerous lines.  One could place a toothpick lengthwise on the fast line of a corner and Lauda would put the outside of a tire on it every lap for an entire race.

The new Ron Howard film “Rush” brilliantly explores the area in between these extremes, the clash of these personalities. Possibly the greatest dual in the history of Formula 1, decided in the final minutes of the final race, by one point.

It also must be remembered that in 1976, drivers actually piloted and controlled the cars, unlike the new F1 cars that run by multiple computers manipulated by the chauffeur  once removed. As it turns out, the computers are quite capable of speeds beyond the capability of even immortals to control as the best F1 driver in the world, Aryton Senna, sadly found out in 1994 at Imola.  (“Senna”: 2010).

The human stories between these two mostly exhibit how polar human extremes relate to each other. Howard masterfully explores them and the actors flesh out their roles to perfection, especially Daniel Bruhl, whose performance is nothing short of brilliant. The cinematography is amazing, much more textured than was previously done in “Grand Prix” (James Garner: 1966) and “Le Mans” (Steve McQueen: 1971).  Unclear how Howard pulled this off with a limited budget, but he definitely gets it done.

Disclaimer:  I was the Assistant Medical Director of Championship Auto Racing Teams (Indy Cars) from 1980 through 1995, and I was present in the pits and around the track at several Formula One races here in the USA, Watkins Glen in 1980 and the Detroit street race around the Renaissance Center in ‘82.  The F1 Medical Director at that time was Professor Sidney Watkins, a neurosurgeon in London and I knew him on the track, talked to him at length about F1 racing. I also spoke several times to Nikki Lauda but James Hunt died unexpectedly of cardiac arrest before my time and I never saw him.  Burned out rather than faded away.  Somewhere Neil Young was smiling.

Nikki Lauda was a consultant for this film and blessed it.

*  Clay Regazzoni was severely injured at the Grand Prix of the United States at Long Beach in 1980 and was paralyzed from the waist down, ending his F1 career.

Best quip: “James is a good driver but an immortal ****” (Clay Regazzoni)

Hunt’s will stipulated that £5,000 be set aside so that his friends could give him a proper send-off. Loved ones received invitations that read, “It is James’ wish that you get pissed.”

For my money, the Formula One circus is one of the most exciting and colorful sporting events in the world. The skill and intensity required to compete at nineteen international circuits, rain or shine is unimaginable. I was lucky and proud to have been a tiny part of it at some point in my life. The saga of Hunt and Lauda is an accurate representative sample. This is brilliant film making. Go see it and feel the rush.

A little slow in the first half but catches up quickly. I give it four and a half of five 18,000 RPM wails. (Must See) 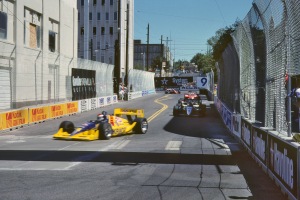