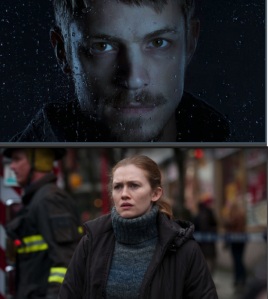 Trolling the cable channels looking for something interesting, I stumbled upon a rough diamond on the AMC Channel worthy of a focused review.

“The Killing” was adapted from a previous Danish TV production. Two seasons, 2011 and 2012 followed by an abbreviated third season on a separate plot ending summer of 2013. I’ll limit my remarks to the first plot, seasons 1 and 2. Season 3 will deserve a separate review.

Relatively unknown French-American actress Mireille Enos is a phenomenon.  As detective Sarah Linden, she specializes in murders of young girls and she becomes so absorbed in investigations she decompensates, fails to sleep or eat and isolates herself from other human contact. After a previous investigation she landed in a psych hospital for a month. She closes her eyes at crime scenes and suffers every vibration of the act. Her intensity and focus burns the screen.

“The Killing” expands the usually jejune format of the police drama, empowering it with greater depth and artistry, devoting a full season to the investigation of a single murder case. The progression of events peels away one day per episode in a “Blade Runner-like” environment of constant rain and dreary landscape.

The search for the killer expands into a visceral stream of consciousness diegesis, bleak and oppressive but so well told that it’s beyond obsessively addicting. The characters come alive in the extreme and the viewer dives in at their peril. The peripheral characters especially the Larsen family are equal in fervency and ferocity.

The series was nominated for several major awards but drew a mixed reception from critics probably because of the burning intensity and convoluted plot requires more focus than “2 Broke Girls”. The series was also felt by some critics to be too derivative of David Lynch’s “Twin Peaks” (1990-1).

A major complaint of the critics was that the writers refused to concoct a pleasing ending for season 1, relying on stellar but isolated performances by the actors. That said, it must be remembered that, in their quest for originality the writers have no particular obligation to please their audience. The greatest TV dramas, “Deadwood”, “The Wire”, “Breaking Bad” all took risks exploring the vehicle in an intrepid, imaginative and inventive mode. The audience is free to find their way if they choose, but they are not the prime mover.

“The Killing” is a slow burning, eerie, multi-dimensional exploration of how a teenage girl’s murder impacts the lives of others in and out of the event circle. Exceptional writing, credible characters and intense performing arts mark the plot. The cinematography is exceptional.

I found “The Killing” one of the most incredible viewing experience in television media I have ever become immersed in. Maybe not for everyone. Give the first episode a watch and you’ll know one way or the other. If you stick with it, you’ll find “The Killing” an absolutely visceral experience, the top of the performing arts heap.

I give “The Killing” 5 (yes FIVE) of five dreary Seattle landscapes. You can find it on Netflix and the torrents.