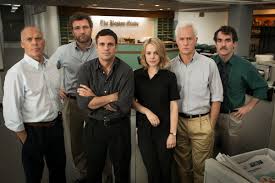 Comes to Pittsburgh in limited release (only one theater- The Manor on Murray Ave) heavily hyped by accolades from all over as a fantastic film, destined to sweep the Oscars.

Not so much. It’s an interesting film with a bunch of really good actors but it’s all been done endlessly before and many times better.

It’s all about the meticulous inquisitorial collection of small bits of otherwise inconsequential data that when correlated over a period of time yields an informational goal intentionally obfuscated by interest groups. “All the Presidents Men (1976) did it better and “Zero Dark Thirty (2012) did it exceptionally well. The newsroom drama has also been done better- “Newsroom” (HBO 2012-2014).

The characters slowly come to realize that there has been a massive cover-up of some really egregious goings-on right under their noses for 20 years. The undercurrent is controversial and inflammatory to say the least. The more they sniff around, the bigger the mess gets, until it finally draws in a large number of Boston bureaucrats and Church authorities.

Interestingly also is the journalists acceptance in deadpan that the lawyers who went way, way out of their way to protect suspect priests were “just doing their job” and the city fathers opinion that if there was any hanky panky going on, it was acceptable collateral damage for all the benefits the city received from the church.

Interesting also, as you may recall, was the tirade of Irish singer Sinead O’Connor who famously tore up a photo of the pope on Saturday Night Live, Oct 3, 1992. “Fight the real enemy.” The stunned audience went completely silent. It has been speculated then and now that Sinead knew a lot more than she’s ever publicaly said about the roots of this tirade way back in ’92.

The slow, plodding progress of the film facilitates the emotional impact all around to be “spotlighted”. But in the end, the coherent driving force of five investigative reporters are diluted somewhat by each stepping out to showcase their own individual talents instead of blending as the real personages probably did in 2002. If it’s, as one critic opines: “Arguably one of the best movies about journalism ever made”, then journalism is pretty boring and maybe not good fodder to while away two hours enduring the mundane efforts thereof.

I give it three of five Micheal Keaton scowls. Interesting but others have done it better.

Disclaimer: Contents are extremely political and potentially inflammatory. This review is not to argue about content, just to dissect the film’s dynamics.

Eagerly anticipated: “In the Heart of the Sea” (Directed by Ron Howard) Out mid-December, 2015.

VERY eagerly anticipated: “The Revenant”, directed by Alejandro G. Iñárritu and starring among others, really interesting author Tom Hardy. Out end of Dec, 2015.