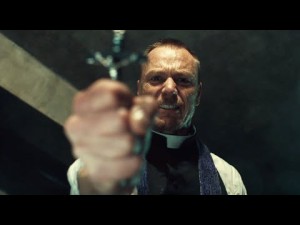 A plain-vanilla re-make of the original but it brings back psychic phenomena for many who were around for the original.

It’s been Forty-three years now since the release of William Peter Blatty’s “The Exorcist” in film version directed by William Friedkin. I wonder haw many of you saw it in December of 1973.

I was a second year medical student at Georgia. I sat absolutely terrified down to my toenails. It was simply the most frightening spectacle I ever witnessed. It made “Jaws” look like “Mister Rogers’ Neighborhood”. I slept fitfully with the lights on for two weeks. I have never watched it since.

The book was inspired by the 1949 exorcism of a 12-year-old boy in the Washington, DC area. By history, there were a number of people that witnessed this alleged demonic possession and there were a number of opinions about it ranging from the real thing to fabrication. There is no way to fact check any of it. To psychiatrists, the boy suffered from mental illness. To some priests, this was a case of demonic possession.

But whatever happened, Blatty imagined it in truly demonic detail, his book landing on the New York Times bestseller list. The film was nominated for 10 Academy Awards but was pretty much passed over, only winning two minor ones. Martin Scorsese places The Exorcist on his list of the 11 scariest horror films of all time.

Zelig that I am, turns out I had a thought-provoking connection to exorcism. When the lights went out in New York City on July 13, 1977, I was a second year surgical resident at NYU. I happened to be rotating at Midtown Hospital, up around 50th street and 2nd ave. I think (no longer there today). It all happened in the blink of an eye. A very, very strange vision- the entire of New York City suddenly pitch dark. Then the screams and confusion.

Standing on the roof of the facility, I was confused too. Since Midtown was a small “community” level hospital with no emergency department, I figured I would not be of much value to anyone there as most of the injuries would be transported to Bellevue, or (then) University Hospital down on 34th or 27th streets. So I found a flashlight and set out for Bellevue, something like 15 blocks or so on First Ave. I knew that’s where the action would be, and I was right. 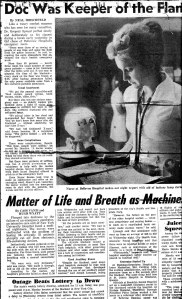 It was a zoo. All the generators had instantly failed and everything was done by flashlights and candles. Volunteers were turning cranks for ventilators in the ICU. Everyone was doing what he or she could for the steady stream of injuries into the ED. My friend and same year resident Greg Spiegel got written up in the Post (see article). So I set to work doing what I could with sticks and bones.

One of my patients was a Jesuit priest from somewhere nearby who injured himself falling down darkened stairs trying to get out of a building. I was sewing up his scalp by candlelight and we got into a conversation about life in general when I brought up the subject of exorcism and what did he think of it as a sort of insider. What followed was a very scary conversation as he opened up to me about things he didn’t regularly talk about.

Turns out he had some experience in exorcism, a subject not advertised by the Church. He said he thought it did happen but was very rare and always with a “mental health” portal of entry (to malevolent spirits). “Normal” people are never possessed. He’d personally seen “possessed” people, frequently kids, do truly supernatural things not possible based on insanity or fabrication, including true levitation, superhuman strength and speaking in very well constructed “tongues”.

Also ruthless one-on-one communication with the exorcizing priest of a truly bizarre nature was the benchmark, VERY much like Blatty’s book. He had read that volume and was quite surprised at how much of the nuts and bolts Blatty knew. This guy had a PhD in something related to psychology in addition to his Jesuit education. He looked me in the eye and told me he BELIEVED that this sort of thing happened when there was a portal of entry and several other criteria were met. The few priests that actually do these things never speak of it and can be summoned for long distances if the call from another priest comes and it seems legitimate. The progress of an exorcism is never revealed nor is the outcome.

Well, trust me, this guy put the fear of God, Jesus and all the Disciples in me and I quickly lost all interest in the subject. I’m not a Catholic nor am I a terribly religious person but I found this guy just a little too knowledgeable and convincing on his discussion. If such things do occur, I want to be as far away as possible from them.

As far as the original film in 1973 goes, it inspired rank terror in filmgoers. Father Merrin (Max von Sydow) steps out of a cab and stands in front of the child’s residence, silhouetted in a misty streetlamp’s glow and staring up at a beam of light from a bedroom window above is one of the most famous scenes in film. I was mortified, unable to watch and unable not to watch the two priests slowly climbing the stairs to what awaited them.

People were carried out of theaters. Some theaters provided “Exorcist barf bags”. It’s said that the Academy Awards snubbed it because they were afraid of it. There was a huge controversy about allowing previously sweet and gentle Linda Blair play Regan. She has said since that it screwed up her life and she was rarely heard from again.

So if you choose to watch the watered down Fox TV version on Friday nights, remember that there’s a lot of history behind it. Maybe you won’t be so interested.

Excellent TV coming soon to a cable box near you: