For a lot of reasons, mostly just because of self-indulgence, I have held my breath and purchased a lifelong dream I hope won’t turn and bite me.

So here’s the background:

I’ve been thinking about what to do now that I’m a gentleman of leisure, and “classic” cars loom large in my legend.

My ’74 Karmann-Ghia is paid for and pretty much low maintenance. It’s the obligatory convertible. No point in selling it as long as I enjoy it. After a lot of research, it’s actually pretty hard to find a “classic” car under $30k that isn’t in need of some kind of expensive servicing. I saw a lot of them at Barrett-Jackson and there were a few potential bargains, but very few and B-J takes no responsibility for the condition of the car once it’s sold. The other problem with 30 – 40 year old cars is parts and service. There aren’t many old guys that can really service them and it’s frequently hard to find parts. Most if not all these cars are for “collectors” that have a “stable” of classic cars and a lot of money tied up in them.

If you watch Wayne Carini on “Chasing Classic Cars”, you’ll see guys with literally spotless warehouses full of classic cars that mostly sit there for years. Where do those guys get that kind of money? Carini finds “barn cars” all the time, my God- ’60s Ferraris that have sat in garages for 40 years, then the (always) male owner drops dead and his wife calls Wayne to sell the car. Many are worth millions.

In fact, most if not all the cars I saw that I might have an interest in were “really” in the $40-$50k range. I’m not a collector. I want ONE “Classic” car (all right, technically two) that I can drive and enjoy while it holds its price or appreciates. I don’t move cars around like speculators, making or losing money on each deal.

I can just get interested in a self-indulgent present to myself for 30 years of hard work and success. I’m closer to the end than the beginning now and I can look back on a life and career that, well, fills 15 bound memoir volumes. There are things I can productively do now for the rest of my life and things I can’t. Ever since Barrett-Jackson in Vegas a few weeks ago, I’ve been thinking I’d really like (another) “classic” car to dote on. I really am a car guy and we’re all unhinged like salmon swimming upstream. The fish hear their song and I hear mine. I have a very comfortable retirement fund, but not bountiful. I can afford a limited number of indulgences.

If I’m going to scrounge up somewhere in the range of $40-$50k for a car that has some historical interest but will be pretty fragile as a car to actually drive much, then I would just as soon scrounge up $70k for a car that’s totally unique and can be driven (on nice days) for a couple of years (under 10K miles), and guaranteed will retain it’s value when I go to sell it. Yes, maintenance is more expensive and that has to be accepted, You can probably guess where this is going. 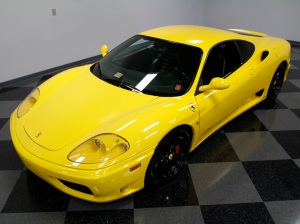 I have stumbled into a rare deal that I hope works out and doesn’t turn and bite me. I have purchased an immaculate 2001 Ferrari 360 Modena coupe from a physician in a city about the size of Pittsburgh about 400 miles away. (see photos at end) This guy has SIX Ferraris at home and last month purchased another new one. So he put up his Modena for consignment. The good doctor had put a LOT of money into it in the year he owned it. The car has 19,000 miles and the FULL ($5000) service was done 500 miles ago. That’s the big expensive one every 15,000 miles. Why so much money in such little time? Because, compared to a Ford of Chevrolet engine, a Ferrari is the London Philharmonic compared to the 86-year-old choir soloist at a local church. 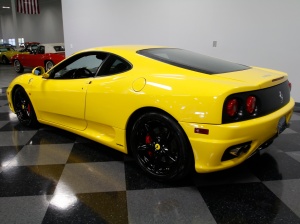 Last year, in addition to the big 15k service, he put in new mufflers, new black wheels and tires, a new clutch and a lot of other things. He just wanted to sell it quickly to put the money into his new one and I stumbled into this thing. It’s immaculate. He has all the records and paperwork and after we talked, he gave me the car for a VERY good price. About $20,000 less than most of them are going for today. A price such that I can drive this car for two years, put 10,000 miles on it and sell it for at least what I paid for it, maybe more.

The later years Ferraris are definitely said to be more reliable and drivable. The F355 series up till 1999 was a dramatic improvement but the engine still had to come out every 15,000 miles to refurbish a lot of things, not the least of which was the timing belt, for if it skips a notch from wear, he engine explodes. To see a Ferrari engine dropped out of the bottom and splayed out all over the floor is a sight I really don’t want to see. The newer series starting in 2000 were friendlier to mechanics; engine didn’t need to drop to get the job done. As of that year, the standard notch 6-speed transmission evolved to the “paddle” shifter automatic, built like the Formula One cars. Instant shifts up and down just like Lewis Hamilton does it. This with 400 horsepower and a red line of 8500. 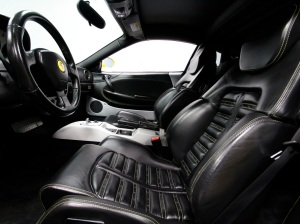 “Used cars” of any variety depreciate. Ferraris never depreciate. That Ferrari shield on the side of the fender is worth a lot on virtually every level, but maintenance always involves more money. That just has to be accepted. Service is expensive on these things and other expensive things wear out more quickly because of the high performance engines. Ferrari doesn’t make cars; they make engines and farm out the rest. Coachwork by Pininfarina, wheels and all the rest are built by others. Each Ferrari engine design sat in a Formula One car 10 years earlier and is simply detuned a bit. The same technology goes into every engine and they can be/are finicky and idiosyncratic. That has to be accepted too. But in the immortal words of Steve Jobs, “The journey is the reward”, or something like that.

There really is Ferrari and then there’s everything else. 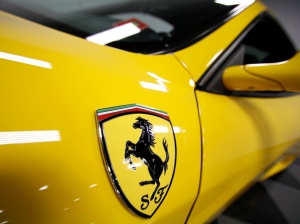 Speaking of Formula One, the Prancing Black Horse has the most extensive history of any four-wheel vehicle.
Ferrari is the most powerful brand according to Brand Finance. Like Harley Davidson, it’s a culture, not a vehicle. Ferrari is the most successful racing team in history and holds the most constructors championships (sixteen) and produced the highest number of winning drivers in Formula One (fifteen). It is the only team to have competed in the Formula One World Championship continuously since its inception in 1950. 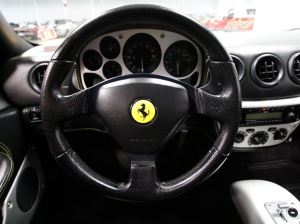 So I have become a minor league “collector” of “classic” vehicles, including vintage Triumph motorcycles. Technically, an investor in vehicles that possibly will bring a greater return than the stock market, especially if it collapses following November 8. A LOT of things are going to change after that and I’ve chosen to cling not to my guns and bibles, but my Cars and bikes. 🙂 We’ll all see how that works out soon enough. 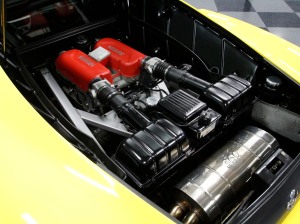 Here it is (see photos). The black wheels and interior sets off the yellow very strikingly. It’s totally flawless (so far). You can see the magnificent engine through the back window.