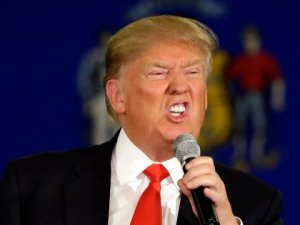 There’s pretty good evidence that there is a contingent of Trump
supporters that will NEVER give up on Trump no matter what he does.
Every stupid lie over a Tweet brings them closer to him. However,
after the events of the last two months, including but not limited to
the fact that he has achieved nothing, especially any of his loud
promises, will result in a cumulative deterioration in that group in
time. It’s a long game.

They were not ALL nitwits, some just thought he would be the one to
“shake up the system”, not realizing he was a full-on sociopath capable
of destroying the system. As time progresses, many of those will see the
light and split to other factions, leaving a bare bones contingent of
those that will always find excuses for Trump’s behavior, and an
open-ended ability to blame others for his gaffes.

Trump thought he was invincible because of his radical core of
supporters would push anything home. He thought his deal making ability
was inviolate.He really thought he could arm twist his way to putting
this ridiculous bill into law. He, like Obama, got introduced to the
realities of congress. The honeymoon, if there ever was one, is
definitely over. Nancy Pelosi smirked that the author of the “Art of the
deal” made a rookie mistake. Now, the entire game has changed and will
not go back to the old days two months ago.

This would-be health care bill is as dead as a roadside roadkill skunk
and will never come back. The Donald, skulking back to lick his wounds,
realizes that. So now the game plan is to “allow Obamacare to explode,
following which the Democrats will come begging us to fix it” (a phone
communication to Bob Costa of the Washington Post yesterday afternoon.)
Of course, the reality is that there is no evidence Obamacare is
exploding, or will do so in the near future. It simply needs
adjustments.

Chuck Schumer hit it on the head yesterday. Obamacare is in place and it
can be adjusted so why not everyone get together and do that rather than
trying to craft a replacement that would take years to make everyone
happy. The incentive to do that may hopefully be approaching, but it
will probably only be after congress is thoroughly shaken up in the 2018
elections which I think is coming.

I think, as do a lot of other experts (not necessarily me in that group)
that this isn’t just a forgettable loss that happens every day in
congress. This is an unqualified Richter 10 disaster that actively
undermines Trump’s ability to lead. Virtually everything he’s done in
the last two months has failed and the number of flat out lies that roll
off his tweet machine continues to astound and continues to undermine
his credibility, if he ever had any. The combination of having
everything he signed tied up in legal quagmire, quietly asking the
taxpayers to fund the impeccably silly and ill-advised wall the Mexicans
gleefully refused to even talk about now combined with his inability to
get ANY health care law passed. Never mind that NONE of it fulfilled
his loud previous promises that everyone would be covered cheaply.

He’s now skulking, contemplating his next move (probably) in his
multi-million dollar estate in Florida wasting millions of dollars of
taxpayer money, disrupting the local economy with hundreds of guards and
restrictions while the rest of his family wastes other millions needing
to be guarded when they take a walk down fifth avenue to window shop.

Well, folks, there are some likely scenarios. I think next up on the
ledger is Trump and his conservative friends fucking up the economy by
cutting out everything and anything that might actually benefit people,
but saving a lot of money to be spent elsewhere. Now that he’s found out
congress is a little tougher than he previously thought, and congress
has figured out they don’t have to be bullied, this will be a very
interesting game, indeed. It’s not out of the question that Cruz et al
will try to sink the government again, but this time Trump is in a
different position than he was a year ago, a position of being
responsible for the ship’s safety.

I think also that Trump’s silly tweets and wild, unsupported accusations
will continue and he will double down on all of them, slowly but
progressively eroding his credibility and also eroding his “base”. At
some point, the Republican majority, becoming more terrified at losing
their majority in 2018 will start doing some interesting things we don’t
really know the nature of yet. I think it’s highly unlikely Paul Ryan
will ever trust Trump again and vice versa, so Trump’s relationship with
congress will be non-existent.

First time, I’m wondering if this continues, will there be an attempt to
evict Trump from office in 2018 simply on the basis of his inability to
lead, much less his ability to fuck up the world. And BTW, we haven’t
seen any world crisis yet this month for Trump to fuck up. We don’t yet
know how bad or how dangerous it could be.

Pence, conservative wog that he is, comes off infinitely more
“presidential”, and might attract a lot of Trump’s more realistic
followers. I’m wondering if this could happen.