As many of you might recall, I predicted a long time ago that within five years or so (as of that prediction), American highways would be replete with electric cars. At that time I really wanted the Lotus Ethos, but Lotus fell on hard financial times and it never came to fruit: 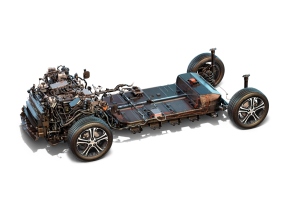 Complaints and sour grapes that the current lithium battery technology is inadequate for widespread use and potentially dangerous have not stopped innovation and the proliferation of all-electric cars. Now virtually all the major car companies have a model either in production or on the drawing board.

The first was the Prius Hybrid that simply used electric power to augment its pretty standard engine. Mainly what it did was shut off the engine during stops, a huge gas savings. The early Prius got nearly 50 mph which was a big deal in the age of four dollar a gallon gas. Later iterations of the Prius were more efficient but it still ran mainly on a gas engine.

When the Tesla first came out in 2008, it was an electric engine in a Lotus Elise body. It was heavy and ponderous but went over 200 miles on a charge, a radical departure from the hybrids. Then the expensive model S came along in 2012 and sealed the deal. The only car Consumer Reports in it’s history gave a 100% rating. The more affordable model 3 is due for wide distribution in about a year.

Tesla has done two things, they proved that wide use of all electric was feasible and they’re leading the charge in recharging innovation. What’s coming down the road, so to speak, with Tesla is a wide network of 90-second battery changes. Down with the spent battery, up with a new fresh one. But when considering Tesla, one must remember that their re-charging hardware is proprietary. Only works with Tesla, which would be a bit of a logistics problem as standardized connections proliferate across the country.

So I have a car coming up to the end of the lease and I will be turning it in. My wife started to develop an interest in electric cars. She would be the perfect person to use one. She rarely makes long trips (can use another car if needed) and there are dedicated recharging stations at the hospital where she works and they’re free. Technically, she could use those stations every day to keep the car charged. She’s never seen another electric car parked at those stations and at the time she arrives (6:30 am) she would always have one available.

After much research, she decided to purchase a new Chevy Bolt (with a “B” not the Volt). Chevy’s new all-electric, said to have (all other things equal) a range of well over 200 miles per charge. The price was reasonable, under $40,000 with all the trimmings and safety equipment. Side mirror blind spot indicators, backup warning, “all around the car” camera that shows the entire circumference of the car, back up camera and most interestingly, the rear view mirror isn’t glass, it’s a camera that shows a wide view of the rear of the car when underway. Said also to carry a $7500 tax break for purchasing one.

When I looked into this, what surprised me most was the exploding number of re-charge points around the country. Most at restaurants and hotels but most along major highways. You really can go 150 miles, plug in somewhere and continue this indefinitely, even in lesser States than California.. There’s one at the Dunkin’ Donuts right down the road from us. Free. Google Maps now shows charging stations nationwide.

But it turns out that understanding charging points is a bit of a learning curve. One would think that the connectors for charging stations would be standardized, but noooooo, there are three different female receptors out there. One for “Asian” cars, one for American and European cars and one for Tesla. They are not interchangeable. Nissan one only works installed the charging center down at the local “Drunken Donuts” for the Nissan Leaf. The manager of the facility knows nothing about the charging station. Nissan just used their property.

So in planning trips, one has to specifically look for the “right” kind of connector. At home, the car plugs into any normal two-prong 110 wall receptor and takes about 20 hours to fully charge on 110. Much faster on 220 but an electrician has to set that up. My wife charges every day at the Receptors located where she works at UPMC St. Margaret, where she’s never seen another car charging there. Yet. All the hospitals now have plug-ins.

When I got to drive this thing, I was also surprised at how quick and quiet it is. There is virtually no sound other than some minimal road whine. 0 – 60 mph in about 6 seconds, which is pretty quick and instant, torque. That works for me as I’m constitutionally incapable of getting to 60 in more than 6 seconds, four is better. But my wife is worse which is why I carry a lot of insurance on her. The dash has a huge computer screen where everything can be viewed. Car has Bluetooth, a rolling WiFi hotspot, pretty good radio, comfortable seats and adequate creature comfort. There is no routine maintenance. Rotate the tires once a year.

There is a handle on the left side of the steering wheel that when applied as the car goes down a hill, applies the brakes progressively and re-charges the battery, extending it’s road life somewhat.

Like I said before, this is an idea that’s time has definitely come. This car, the Bolt, has won both Car & Driver and Motor Trend car of the year. There was a minor crump of some of the batteries recently affecting less than 100 cars and it’s been fixed. Battery warranty is 8 years.

Look for a massive splash of these cars, and dramatic improvements in road-ability, as the technology gets better in time.

I’m a car-guy of the first order and I’m definitely impressed with this car. Check it out if you have an interest.