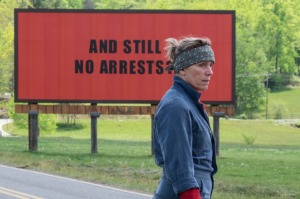 Some may remember “In Bruges” (2008), (Golden Globe for Best Actor Collin Farrell). The writer/Director of that underrated masterpiece (Martin McDonaugh) now presents this film, an epic about anger and its results all around.

Frances McDormand has lost a daughter to a heinous crime, it’s been seven months and the case seems to have gone cold, so she rents three billboards in succession chiding the police department in her town for not working hard enough to solve the crime. This sets off a rapid succession of events that change the total complexion of the town most of those that live in it.

The Chief responds to pressure by fruitlessly trying to reason with McDormand. His first officer tries to get the billboards taken down by intimidation. The town citizens get involved and the result is a masterpiece of writing and character development that never follows expected paths.

McDormand, Woody Harrelson and especially Sam Rockwell command the film, each in world class roles. McDormand’s speech to a priest offering counsel is as world class good as it gets. There are no easily identifiable heros or villians and most importantly, the progression of events is never predictable or even logical. It’s something that could more likely happen in real life as in a movie.

Frances McDormand accurately portrays every conceivable real emotion as she proceeds to get her case, and it’s accompanying pain, pushed to the front burner. She’s simply amazing; you can’t take your eyes off her. Sam Rockwell spans the breadth of a basic aggressive police officer to violence to compassion, wearing the observer out.

The film is incredibly well written, the performers are all immaculate, the characterizations are impeccable and I truly believe there will be a row of Oscars around for this excellent film.

Just a little too long and sags just a little in the middle. Otherwise, highly recommended by me.