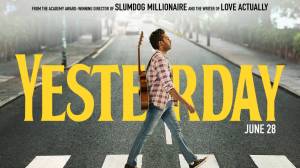 What an interesting concept! Think for a minute if no one in the world had ever heard of the Beatles and you were a struggling singer/songwriter no one ever heard of who inadvertently covered “Yesterday” for some friends which was greeted with blank looks. A parallel universe where the Beatles never existed. Slowly it dawns that he has a grasp of the genius and as he passes them off as his own from memory. His fame increases and he inevitably enters the fame/money zone recreating the songs.

This constitutes about the first half of the film, following which the film deteriorates into a seemingly endless sappy, dreary romance putting every diabetic in the house into shock, obliterating the original concept. About the time you think it couldn’t get worse…..it does. The last 30 minutes is so bad all that can be heard in the theater is the clank of jaws dropping.

The protagonist Jack does a yeoman job singing all the selections himself. Kate McKinnon as a shark-like record exec tries to save the film and does a great job but she’s isolated. Toward the end of the film Jack has a meeting with someone interesting that alters his perceptions, a plot diversion completely underdeveloped and just plain silly. The film could have been saved by simply better writing. What would the world have been like post-Beatle influence? How would the state of musicology have changed. I guess how would lives have missed what they never had? None of these interesting ideas were explored, the plot endlessly revolving around when a romance will finally bloom.

The film began with a very interesting image that changed from John Wayne to Ratso Rizzo in the space of a few minutes. I cannot recommend this film. It’s an embarrassing flop. Wait till it comes to HBO. I give this film one Martin D-28 acoustic out of five.