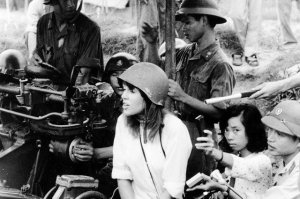 “Jane Fonda is guilty of treason and should be prosecuted to the full extent of the law:

“Forgiveness is divine, but to forget is foolish. As often stated,
” to forget the past is to repeat the same mistakes”.

“Forgetting the past is not an option for any of us
that want to maintain our liberty”.

Well, time to round out the above platitudes with a bit of an alternative view. DISCLAIMER: I am a card carrying liberal Democrat who supported Obama in 2008 and 2012, for little other reason than to avoid what the opposition offered. That said, I’m an OK guy and even my conservative Republican friends like me although they roll their eyes like Stevie Wonder when we talk politics :-). So slash away. I can take it and frequently do in “Med-Events” a forum for politics where blood runs freely.

It bears remembering that opposition to the Vietnam Conflict was extremely pervasive throughout the country in 1967 and not a function of one highly public figure who got her photo taken sitting in an NVA tank. These heterogeneous forces had reached the point where it was literally tearing the fabric of our society apart I was present at the Vietnam Vets Against The War demonstration in Washington DC in April 1971, headed incidentally by a young version of John Kerry. One of the most heart breaking scenes I ever witnessed was the lineup of vets, some in wheelchairs in turn tossing their Purple hearts, Bronze and Silver Stars over the White House wall. I wept openly and Nixon ignored them.

Jane Fonda gets singled out for the fact that she was extremely visible, but there is little evidence that she mattered other than being a good propaganda shill for Uncle Ho. Fonda has said her trip to Hanoi was primarily motivated by her desire to document the American random bombing of Hanoi that resulted in thousands of innocent civilians being killed and bombing of important dikes that, if destroyed, could devastate the lives of millions more. Fonda is unapologetic about the trip or her participation in broadcasts on radio Hanoi but regrets the pictures taken of her at the gun emplacement. She said it made it appear as though she was celebrating armaments aimed at American planes, which was not how she felt and was not the context in which the pictures were taken. She reminds readers that the U.S. investigated her trip and found no reason to bring any charges against her. Any evidence that captives at the Hanoi Hilton suffered more specifically because of Jane is not pervasive. Their captors had plenty of reasons to hassle them. If it wasn’t Jane, it would be something else.

All this is fraught with a LOT of passionate emotional overlay but the realities are extremely complex and much more difficult to fit into emotional diatribes. As it pertains to Obama, to those just to right of Genghis Kahn, it really doesn’t matter in the slightest what Obama does, it will always be wrong. In fact, there is not and never has been any convincing evidence that Obama is a Muslim or has any sympathy thereof. The supposition that Obama was born in Kenya has been refuted so many times that its laughable now except to serious loonies like The Donald.

Obama is simply a left wing liberal Chicago politician who’s trying to do the best he knows how to do while dodging bullets from all quarters. If Obama came out in support of poop scooping, his predictable opposition will argue that he’s abridging the rights of dogs to poop wherever they like undisturbed and the Constitution guarantees it. So I remain unimpressed with many of the emotional arguments against the President. The voters had alternative options in 2008 and 1012 and they didn’t accept any of them so such arguments are moot.

The problem with Vietnam is that as some of you mentioned, we didn’t learn from previous mistakes in South East Asia. Trying to fight a conflict that could never be won if for no other reason than holding up a spectacularly corrupt local government. The French found this out bitterly at Dien Bin Phu in over 170 days of fighting in 1954 in which the Viet Minh took 11,721 prisoners, of whom 4,436 were wounded.

That should have been pretty convincing evidence for the Americans to avoid this area of the world. I stood at the site in 2010 and felt the vibrations of all the suffering that occurred there. Strategically, it was apparent to even me that the French never had a chance. The Viet Minh held the high ground and that was the end of it. Read “Hell in a very small place” by Bernie Fall for a word picture of what happened there.

But at the time, the prevailing political thought was that if left alone, Communism would flow horizontally instead of vertically, so it was necessary for the forces of good to stop that progression. A disastrous mistake that left over 50,000 young Americans dead for an objective that never could have been realized ever.

And speaking of objectives that could never be realized, this argument bleeds directly into our attack on Iraq in 2003, based on non-existent evidence that a tin horn dictator in this obscure area might be a threat for the rest of the world. The rationale of the attack on Iraq remains a mystery to all but Cheney and Rumsfeld, neither of whom mention it much anymore. Presumably a manifest of the paranoia following 911. But it must also be remembered that all the conspirators of 911 were Saudis, but bombing Riyadh would not have been in the best interest of our oil consumption.

So the sum total of the invasions of Iraq amounted to nothing other than an extension of phantom menaces into Afghanistan. And speaking of not learning from history, if may have been useful for the American Federales to look how the Russians got their asses kicked in Afghanistan and unceremoniously tossed out of the country, a maneuver that directly resulted in Communism as a ruling principle collapsing in Russia.

So US troop deaths in these areas are doubly depressing. They’re depressing because they’re young, vital people that should go on to have lives, careers, children and happiness. The second tragedy is that their lives are negated in conflicts that cannot be won in any event and from which we will eventually be kicked out, resulting in a sum total of nothing. We learned nothing from Vietnam and your young people are picking up the tab.

As it pertains to Obama, I supported him not so much because he’s the cat’s ass but because some the truly frightening players of the opposition, including Palin, Bachmann and Santorum, likened to the barflies at the Star Wards Cantina. The ultimate selection of Romney, a rich guy that thought it might be cool to get ferried around in jets and helicopters, and who changed virtually ever stand on anything he held before 2012 to make the Christian Right wackos happy. They had the money. The voters got it very effectively and Romney was out before 11 pm on Nov 6, 2012.

So this has been an otherwise uneventful Friday afternoon and I have time and energy to pontificate on these issues. Enjoy for whatever interest you my have.