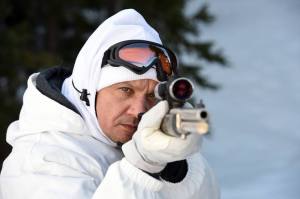 Desolation angels. “Wind River” is an example of truly phenomenal components of a great film. Phenomenal, riveting performances by really excellent actors. Incredible cinematography on location in the Utah Mountains. A spellbinding story line that drags just a little. When put all together and stirred, the result is just a bit less than the sum of its parts, but much of that lack can be forgiven because of the quietly spectacular actors.

Although true in its essence, Director Taylor Sheridan (who wrote the excellent “Sicario” in 2016) uses the same nuts & bolts in Wind River but comes off just a bit politically charged about the abuses of native Americans that are all too apparent from history and in the present. Sheridan also tends to maybe overwork the hard-times-in-the-country theme; you’ll note an upside down American flag on the reservation.

If there are very minor philosophical deficits in the story line, there are none for the actors. Jeremy Renner (The Hurt Locker 2008) is absolutely riveting. Elizabeth Olson moves from tranquil to aggressive in a heartbeat. But deserving of special accolades is native American of Comanche ancestry Gil Birmingham. His performance is simply incredible.

Even at 90 minutes, the story line drags just a little. This film could have been a very taut HBO hour-long drama. It starts out slow but progressively drags the viewer into a very shocking and violent end that a potential viewer should consider if they’re a little on the squeamish side. All things considered, the 87-94% rating from Rotten Tomatoes.com is definitely deserved.

BTW, there are emerging articles suggesting that a LOT of potential audiences check <rottentomatoes.com> before considering overpriced tickets and popcorn to see a dud. It’s changing the way studios make and market films.

Here’s a trailer for “Wind River”

One of the top five films this year. I think a “must see”, especially for Gil Birmingham’s performance. I have absolutely no doubt that there will be a lot of Oscar talk about this film and it’s principal characters. Highly recommended by me for the performance artistry and cinematography. I give it four and a half of five bloody snow tracks.